Kathleen was born in Centenary, South Carolina on the family farm. She loved her Grandma’s English Garden in Centenary on the Little Pee Dee River. She was brought up working on the farm. She didn’t like to pick beans, but she had to, and she helped can them! She loved her brothers and sisters. CM was 4 years younger than her and she always wanted to race with him. They would run and run. She loved it because she was older and faster and could always beat him! They loved to throw a small rubber ball over the garage. They would throw as high and as hard as they could to see how many times they could catch the ball without it touching the ground! She helped to raise her much younger siblings, David and Libby.

Being born in 1920 she and her family soon face the challenges of the Great Depression. “I was a young girl during the depression, but I do remember we always had food and shelter and many at that time did not. We lived on a farm and my father and mother provided for us even through those troubled times.”

She played basketball at Centenary High School. She graduated after 11 years!

She went to Lander College to study to be a secretary. She thought that it was wonderful to be on her own. She wasn’t all alone, though, because her cousin Lola lived on the same floor and looked after her. Her mother would always write her letters and tell her to write back to the “babies,” David and Libby, because they missed her so much.

After Lander she moved to Columbia and worked in a bank. She needed a new pair of shoes, so she went to a shoe store there. The salesman, Curt, that helped her asked for her phone number after he sold her the shoes and she, naively, gave it to him. She didn’t realize until later that he had given her the wrong size shoe so that she would have to come back and exchange them! Kathleen went to work the next day in her new shoes and her feet were killing her. She went back to the store to exchange the shoes, and Curt called her the next day and asked her to go out for a Coke. They went out on a double date, had the Coke, and drove around town. He called her the next day to ask her out again. Her reply was, “We just went out last night!” They were married shortly after, and they were married for 42 years before he passed away in 1984.

Kathleen reminisced about Curt’s jobs, “We traveled to many different states. Some of those assignments took us to northern cities but one in particular brought us back South, to Alabama. I liked it in Alabama because we were in the South.”

She loves to tell stories of the rivalry that she had with Curt between Clemson and Carolina. She is a staunch Clemson fan because her father went there. Curt was always a staunch Carolina fan. He once gave her a Carolina corsage to wear to the game. She said, “I can’t wear Carolina colors!” She ended up wearing the corsage but took the Carolina colored ribbons off before she saw her father! After that he gave her a Clemson corsage made for him by a good friend who owned a local drug store. The owner asked her to strut around the store displaying her orange! She wore it to church the next day and Curt wouldn’t sit beside her. The preacher commented on the fact that “the Streetmans” seem to be not speaking to each other today!” One Thanksgiving Curt has a heart attack and was in the Marion hospital during the all-important game. Kathleen hung Clemson paws all over his hospital room, knowing that he couldn’t get up to remove them! They always had fun with this rivalry!

Kathleen has enjoyed gardening and flowering arranging for most of her life. She has been a member of many garden clubs. Crafting is also one of her hobbies.

She thrives on entertaining others and even at the age of 100, she still wants to host parties. She especially loves being outside and hosting a garden party is such a pleasure to her.

She can eat her weight in oysters and loves any kind of seafood.

I’ve really enjoyed sharing tidbits and memories of Kathleen’s 100 years! She is an extraordinary lady!

Editor’s note: It is a pleasure and an honor to publish the celebration of Mrs. Kathleen’s 100th birthday. I remember fondly delivering the first Sentinel edition to her door as a sample. She loved the idea of a local Simpsonville newspaper and asked how she could be sure to get the paper each month. You guessed it; she became my first paid subscriber. I’ve been delivering our newspaper to her for almost 10 years. Thank You, Mrs. Kathleen, and Happy Birthday!♥ 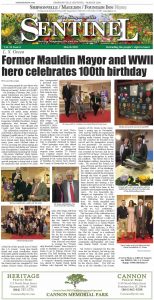