Did you know that South Carolina is the only state in the nation to hold ARBOR DAY in December, the first Friday of the month, December 6th for 2019? It seems a little confusing when NATIONAL ARBOR DAY is held on the last Friday in April, and sometimes the same week as EARTH DAY. But because ideal conditions for planting trees vary throughout the nation, Arbor Day is celebrated at different times of the year, depending on the climate of the state. Arbor Day for South Carolina was created by legislation in 1934. It is the time when plants are dormant, and it tends to be rainy; both are factors in reducing the shock of transplanting trees.

The history of Arbor Day goes as follows: J. Sterling Morton, editor of Nebraska´s first newspaper and later appointed by President Grover Cleveland as U.S. Secretary of Agriculture established the first Arbor Day state holiday on April 10, 1872. Over a million trees were planted on that single day in Nebraska. Morton encouraged planting trees on the plains to reduce soil loss and because he missed the trees of his native state, New York. His idea quickly caught on and today Arbor Day is celebrated in almost every state and U.S. territory as well as numerous foreign countries. National Arbor Day was then established April 22, 1885 on Morton´s birthday but was moved to the last Friday of April in 1889.

But I don´t need Arbor Day to plant a tree…I have always loved them. Most likely for the wrong reasons in my youth for I could climb the highest tree in the neighborhood and sway with the wind. I remember being so mad at my dad when he cut down several Mimosa trees also known as Persian Silk Tree on his back forty as he liked to call it…tree killer, I yelled in jest. But being a little smarter today, I know that Mimosa trees are extremely invasive, terrible for people with asthma, and seed pods toxic to our livestock. The same thing with the Bradford Pear tree in the South now considered an invasive tree. They can grow to 30 feet high which is dangerous because the trees have a weak branch structure breaking apart within 20 years. The flowers smell like rotting fish and they crossbreed with other pear trees causing a boom in Chinese Callery Pear trees, the ones you find in our woodland areas with the long, thick thorns!

Trees are among the most permanent plants in our gardens…the biggest and most enduring plants we can grow and, also the most expensive! So, we should pick them wisely and the Internet can be a big help. We can find beautiful trees for any location that can be low-maintenance, pest and disease resistant that can add color and beauty to our garden with just a little research. For example, if you want a colorful, smaller tree some of the varieties of the Japanese Maples such as Acer palmatum ´Garnet´ with its purple leaves or ´Sango kaku´ also known as ´Coral Bark´ with brilliant fall colors and amazing coral pink winter bark are perfect.

If you are looking for large trees stay away from the Water Oak, Quercus nigra. They have shallow roots, take water from your plants and destroy the texture of your soil. Their lifespan is only 30 to 50 years. But White Oaks, Quercus alba are a mighty tree that can live for 300 to 600 years. Another large tree to consider would be the Ginkgo Tree or Maidenhair Tree, Ginkgo biloba. It´s one of the oldest trees dating back 270 million years known from the fossils that have been found. It has a unique shape leaf and golden yellow color in the fall. It is now considered an endangered species because of its rarity in the wild even though it´s cultivated worldwide.

And for an evergreen tree try replacing the Leyland Cypress, Cupressus x leylandii with the Green Giant, Thuja standishii xx plicata. It´s a much stronger tree that is disease resistant with a lifespan of more than 40 years, unlike the Leyland Cypress of only 10 to 20 years.

Arbor Day simply emphasizes the importance of trees in our lives and of course it marks the beginning of planting season in South Carolina (December, January, February). They add beauty to our gardens and our cities (Greenville designed Tree City USA for 37 years); cool us with shade from their branches and moisture from their leaves; reduce air pollution; protect us from damaging winds and water; provide food and homes for birds and wildlife; camouflage harsh scenery; filter noise; prevent soil erosion; provide jobs and more than 5000 wood, paper, and chemical products. In the words of J. Sterling Morton, ¨Arbor Day is not like other holidays. Each of these reposes on the past, but Arbor Day proposes on the future. ¨ It´s not too late to plant a tree!♦ 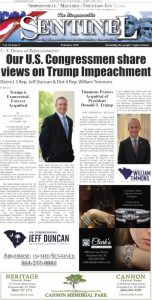