Where can one find cow bells, that special dog food, pine straw, salt licks for the deer, and fresh okra, all for sale in the same place? Come visit Sloan’s Feed and Seed at 910 NE Main Street. This store offers a delightful array of pet, livestock, wildlife, agricultural, gardening, and landscaping products to meet every need. Danny Sloan, current owner and grandson of the business’ founder, and his employee Mike Tabone provide friendly and helpful service. Mike says that their prices are very competitive with those found in chain stores even though the facility is privately owned.

By the way, while visiting the store, please don’t miss the framed vintage photograph hanging on the wall to the left. It hints at the wonderful story behind this business and speaks of fathers passing down their hard-won legacies to their sons. In the photo’s upper left-hand corner, someone has written “in spring,1928” and Samuel Raymond Sloan, the founder, proudly stands in front of the very first building that housed the family business named “Sloan’s Service Station”.

Situated where Highway 14 and NE Main Street (Highway 417) intersect, Sloan’s Service Station opened for business on May 1, 1926, just three years before the Great Depression. An advertisement from that time period promoted operating hours from 7 am to 9 pm. This Texaco filling station sold gasoline, oil, auto parts, kerosene, “light groceries”, candies, cigars, and beverages among other things. It sounds like one of our modern convenience stores!

Nancy Moore Sloan, a petite, wisp of a woman, delights in pointing out details in the photograph that folks often miss. Nancy is Danny’s 87-year-old mother and the widow of Charles Daniel Sloan, Samuel’s son and Danny’s father. The picture reveals a price of $.24 per gallon of gasoline. Parked just behind the gas tank, which looks very different from today’s models, is a horse and buggy, still quite commonly used back then. In the far background, one can discern the original Sloan family homestead where her husband Charles was born.

Today, an Energy Market convenience store with gas pumps and a Romeo’s Pizza restaurant occupy the land where the original Sloan’s Service Station once stood. The Sloan home has been replaced by a Hardee’s as well. The Sloan family once owned the land from this point all the way back just past the current store’s site but sold portions off over the years. Nancy laughs as she recounts how her husband loved to saunter into Hardee’s, sit at a certain table, and proclaim he had been born on that very spot. Of course, when he was born there on September 19, 1928, it was in his family’s old home. She also says that all the highways were dirt roads back then and one of them passed in front of the service station. When they paved it, the road curved behind the building instead, so the family had to switch around the rooms so that the living room would be in the front of the house facing the highway!

Nancy says that people sacrificed a lot when the United States became involved in World War II. Only 8 years old at the time, she remembers one of her brothers, Jasper, serving as a B-17 pilot and being shot down. Thankfully, the French rescued Jasper, and after flying 50 missions, he returned home from the war and became the U.S. Postmaster at Simpsonville for 32 years. She also relays that during World War II, Samuel had trouble procuring gasoline and oil products due to rationing. To make ends meet, he worked at the Donaldson Center during the day and opened his store to sell mainly groceries during the evening hours.

Nancy says that people sacrificed a lot when the United States became involved in World War II. Only 8 years old at the time, she remembers one of her brothers, Jasper, serving as a B-17 pilot. He returned home from the war and became the U.S. Postmaster at Simpsonville for 32 years. She also relays that during World War II, Samuel had trouble procuring gasoline and oil products due to rationing. To make ends meet, he worked at the Donaldson Center during the day and opened his store to sell mainly groceries during the evening hours.

Sometime in the 1940’s, Samuel moved his store to a downtown Simpsonville location—129 SE Main Street and changed the name to “Sloan’s Grocery.” All that remains from the original service station are the old photograph, the advertisement, and two ceramic shakers which Nancy proudly displays on shelves in her home. Sloan’s Grocery started out as a tin building, its construction involving a triple wall. Of course, two gas pumps framed the front of the building. The store became a gathering place, especially in the evenings when local folks would come and sit around the potbelly stove to talk things over. Samuel and his son Charles ran this business for 22 years. After Samuel’s death on November 11, 1967, Charles took over the store and continued as sole proprietor for 20 more years until 1987 when he decided to move the business again. The original building that Sloan’s Grocery inhabited now houses another business called Extreme Tee’s!

So, over 30 years ago, Charles Daniel Sloan picked up his business, and moved it to the current site at 910 NE Main Street. Now, they officially called it “Sloan’s Feed and Seeds.” Nancy explains that Charles’ faith had a lot to do with the way he ran that company. Charles posted the Ten Commandments and The Lord’s Prayer in his establishment as signs of his faith. He manned the store six days a week but closed for Sundays. That’s when the family attended services at First Baptist Simpsonville. Nancy shared that she has worshipped with this congregation her entire life.

Nancy’s and Charles’ longtime home is situated further back on the property well behind the current store. In front of their residence, they faithfully planted and tended a garden year after year. Together, the couple raised three children—Danny, Mike, and Sharon. In recent years, her family has expanded to include five grandchildren and three great-grandchildren. Her husband passed away on October 27, 2007 at the age of 79, leaving the business to his son, Danny.

Nancy shows no signs of slowing down. She says that she loves growing things and each day, she still dons her straw hat and continues to plant and harvest their precious garden. She brings her okra to the store to sell when it is in season. On October 13, 1992, First Baptist Simpsonville’s chapel was designated as an historic site thanks, in large part, to her dedicated and persistent efforts. In 1997, Nancy attended the dedication ceremony for the Hendricks Branch of the Simpsonville Library where she was honored as Nannie Cox Moore’s daughter. Nannie, a high school Latin and algebra teacher, founded the first library in Simpsonville by maintaining a shelf of books in a furniture store that used to be located behind Howard’s Pharmacy. Nancy sadly relates that her Mom passed away in 1932 shortly after she was born. Recently, Nancy assisted with a yard sale at the Senior Center.

When you drop by Sloan’s Feed and Seed, don’t forget their hours: 8 am – 6 pm on Mondays through Fridays, 8 am – 4 pm Saturdays, and of course, closed on Sundays. Also, be sure to check out the back of the store where you will discover a rocking chair poised in front of an old stove. It reminds one of those days back in the old downtown store where folks gathered around the potbelly stove and talked with one another. The story of the Sloan family business wends its way through 93 years of faith, sacrifice, and hard work all the way until the present day, an enduring legacy that has graciously served and benefitted the folks of Simpsonville and surrounding communities.♦ 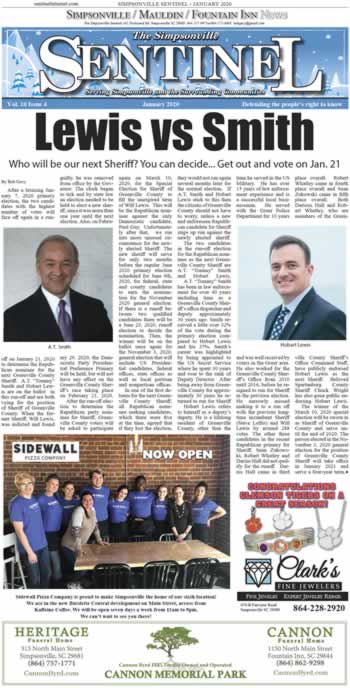